Art by Joshua Keyes – Characters and scene inspired by Castlevania, owned by Konami.

I decided it might be fun to submit a piece for Jazza’s Contest of the Month: New Resolution. The goal was to take a scene from a game that was made for a 1990 or prior machine and redraw it in a higher resolution. *placed 2nd – Runner up in open category* 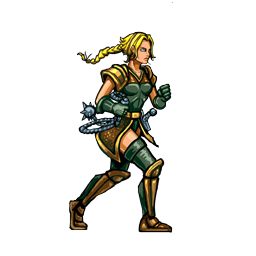 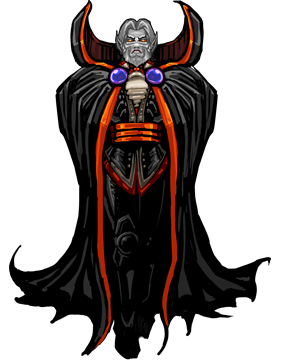 I chose the original Gameboy as my machine. I felt since it had such limited presentation capabilities the transformation would prove to be very dramatic.  The gameboy has a very special place in many retro gamer’s hearts, for the first time one could capture the true essence of video gaming on the go.

At the time there was usually only one TV or monitor in the house, so even if you weren’t out for the mobile experience, this little machine was worthwhile.  It gifted the youth of the time an opportunity to play in private, or when others were utilizing the household screen. If you didn’t own a gameboy advance, you wished you did, as was the case for myself at the time.

A game that has always inspired me has been Castlevania Legends, developed by Konami.  I’m a huge fan of the retro era Castlevanias.  It’s a source of great frustration that this one has evaded my button bashing, even still.  I first learned of the relic while engrossed by the magnificent ode to Castlevania mobile gaming GameTrailers produced called Castlevania Retrospective – Part IV Procession of Portability

Before it was retconned, Legends was to be the telling of the first encounter with Dracula, even before my favored hero, Trevor, had met with the cunning count.  The Matriarch of the fabled blood line, Sonia, was to be the star of the show.  This marked the first female solo protagonist in a Castlevania game.  Alas, since I haven’t been able to play the game, I’m satisfied that I was able to spend some quality time with this entry by giving it the big screen makeover. 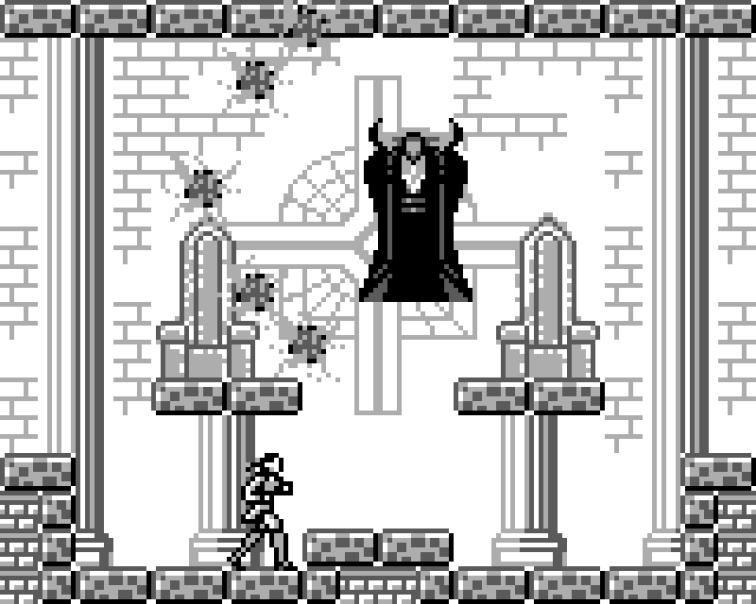 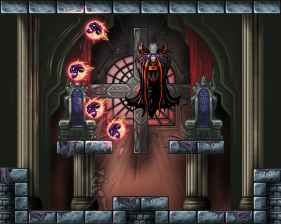 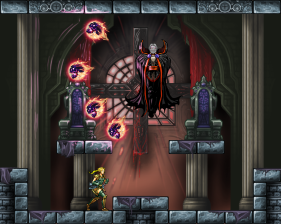 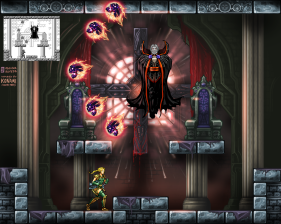 Early on I knew I wanted to make all the images I created as viable graphic assets.  My goal for this project was to make those assets moldable via Tiled, a sort of universal open source tile manipulation application.  This way, if one was so inclined, they could recreate an entire corridor utilising the final components.  I feel this is great practice and fun for development as an artist.  I also genuinely felt that by adhering to a tile sensibility I could retain a clean and authentic feel, respectful of the original game.

I definitely was able to take many liberties given that there was no previous color pallet to adhere to.  This of course is a double edged sword since I had a lot more decisions to make.  I drew references from other final chambers the big bad inhabited on other consoles.  Dracula’s abode needed to feel fairly epic, and so I added several more lavish pieces and architecture with the background walls that were left fairly plain, illuding to a bright light or darkness washing out the details.

Story is always a very important aspect to ponder when presenting any visual, and this project was no different.  I utilized the extra pixel budget to help set a stage where Dracula attempts to woo Sonia to the dark side.  He has prepared for her a throne, so that she may rule beside him as queen of evil, and he as king.  What appears to be a cross and stained glass window in the background I decided would be a demi-cross for the blood ritual that would turn Sonia’s power to the way of Count.  The stained glass was a perversion, a portal that spews dark power from some horrible and terrifying underworld.

I wanted to add a bit more engagement in the scene, since the postures and presentation of the characters was a little less than dramatic.  This is why I decided to make the projectiles have evil skull spirits as their core.  The face, and consequently skulls, are very interesting and attractive subject matter for us, the audience.  The faces add a bit more drama and intrigue to the scene, which I hope makes it a bit more compelling.

The greatest difficulty of the project was keeping the original poses to their very low resolution versions.  I kept wanting to draw something more dramatic that would capture more of the tension of the scene.  I think in the future I would choose a screen capture that had more interaction inherently.

I learned and refreshed many techniques associated to this work, but two stand out to me.  One was the importances of balancing a game’s light and dark levels by their parallaxing layer of perspective.  It’s important that the interactable play area pop out and be as obvious as possible, while keeping the background fun and entertaining when the hero has a chance to glance around at the local.

The second technique that received a lot of exercise was creating lighting and graphical effects that could stand on their own as assets in a game.  The flaming skull projectiles and the many shade orbs and glow orbs I dropped into the scene are examples of these.  As well, the effect of the bursting light from the portal is quartered, as to save time and potential technical constraints.

The contest itself has been fun, and has afforded me motivation to learn and grow in artistry while also exercising industry.  I found out about the contest a bit late, and had to budget time and efforts while still producing what I feel is a quality entry.  Finally, the exercise of finishing a project can never be over emphasised, I am grateful for a positive conclusion.

Thanks you for taking the time to check out my work!  Feel free to contact me with any comments or concerns!  Until next time, peace be with you!

This site uses Akismet to reduce spam. Learn how your comment data is processed.